Milken Scholars find safe ways to give back to their communities. 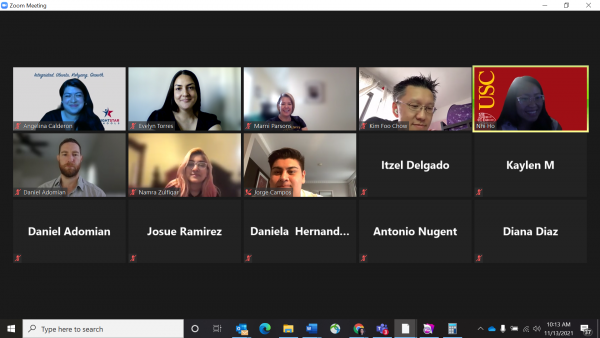 As the world came around to year 2 of social distancing, bread baking and zoom calling, Milken Scholars continued to find opportunities to give back to their communities in a safe way.

“At the heart of this program is our commitment to public service … it’s our responsibility to push that mission forward” reflected Katerina Corr, a 2021 Milken Scholar in attendance at the NY workshops, capturing the sentiment of the over 30 Scholars that dialed in from across the country.

Scholars met for a few weekends in October and November 2021, for the 12th year of Scholar-led college essay workshops at A. Philip Randolph High School, the high school in Harlem, NY, where it all started for the Milken Scholars Program. This annual workshop is led and coordinated by Kim Foo Chow, Milken Scholar Class of 1996, who knows how important this Program is for the high school students, “Current and Alumni Scholars worked in tandem, pairing up with students to benefit from a diverse set of perspectives,” explained Kim Foo.

This year’s remote nature of the NY and LA service opportunities provided the additional benefit of allowing dozens of Scholars to log in to support their communities from across the country.

"I'm in for BOTH Saturdays BUT I'll probably be doing it in my PJs [because] of the time difference" remarked Silvia Brooks, Milken Scholar Class of 1989, as she committed to dialing in at 7am PST for a workshop in New York at 10.

New York Scholar Namra Zulfiqar, Milken Scholar Class of 2017, expressed that the virtual sessions made attendance very convenient and that she was still able to make meaningful connections with the students. “A lot easier to attend given it was virtual, although [I] would love to go to a future one in person” said Namra.

On the other side of the country just a couple of weeks later Angelina Calderon, Milken Scholar Class of 2006, led a college essay writing workshop in Los Angeles in partnership with Bright Star Schools. Once more, a dozen Milken Scholars dialed in for 1:1 college mentorship and essay writing feedback for Los Angeles high school seniors.

The virtual workshops in Los Angeles and New York mark only a couple of examples of Scholars stepping up to give back to their communities during these challenging times.

Scholars in DC met in person to safely deliver a presentation on financial literacy and college aid in partnership with the Institute for East African Councils on Higher Education. Scholars in attendance presented to 20 high school students preparing for higher education that had worries about affording school.

“For our communities that don’t have access to resources, it can be difficult to know how to navigate paying for college” says Ekram Jiru, Milken Scholar 2014, that helped coordinate the DC workshop and has worked with the Institute for East African Councils on Higher Education before.

Masks and mandates would not stop our Scholars from showing up to make a difference in the communities that need it. From essay workshops, interview prep or financial literacy, Milken Scholars continue finding opportunities to advance the dreams of students across the country.

Mentoring, volunteering, and giving back are core values of the Scholars, and at a time when the world needs it most, a little social distancing won’t stop them.