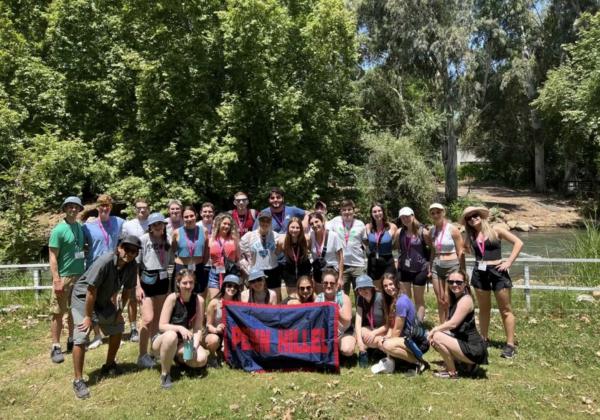 Just days after graduating from the University of Pennsylvania, I embarked on a Taglit-Birthright trip to Israel to explore my Jewish identity and better understand how the conflict affects the daily well-being of Israelis.

While neither of my parents are religiously Jewish, I grew up in Los Angeles in the culturally Jewish neighborhood of Brentwood. Upon attending Penn, campus organizations like Chabad and Hillel further exposed me to Jewish culture. But also throughout college, I heard about the unfolding Israel-Palestine conflict in classes and online. My Jewish background and Birthright trip are inherently biased toward Israel. I can't claim that my environment fosters my thoughts or emotions to be unbiased. However, Birthright is a great place to interview a diverse group of Israelis.

The Hillel Birthright trip hosted us in Tiberius, Tel Aviv, Umm al Khair in the West Bank, and Jerusalem. I aimed to use this opportunity to conduct research for the Milken Institute and Milken Family Foundation to learn more about how many Israeli citizens are in favor of the "two-state solution" for the Israel-Palestine conflict. Israel and the Palestinians haven't accepted the two-state solution as the agreed solution to the dispute. While the UN resolutions refer to a vision with two states, there hasn't been a formal reference to this policy between Israel and Palestine.

I spent the first few days on Birthright learning more about Jewish culture and celebrating Shabbat in Tiberius. Our group leaders introduced us to our Israeli tour guide, security guard, and four IDF soldiers that traveled with us for 10-days. On the third day, we attended an Israel-Palestine conflict presentation. I had my notebook out, learning about Islamic-Judaism relations from 7th CE. A report published in 2021 by the RAND Corporation found that Israelis across the political spectrum oppose a two-state solution.

Similarly, Israelis in the presentation's audience vocalized their disproval of a two-state solution. Sami, a former IDF soldier, mentioned how she understands why the Palestinians are here and can imagine why they believe Israel is their land too. However, Sami also said how the Jewish people have struggled to occupy a dedicated land. The creation of the state of Israel was meant to be a safe haven for Jews. A two-state solution threatens this safe haven. For this reason, Sami believes that a two-state solution will diminish how Israelis experience daily well-being.

While Israelis and Palestinians have lived in the area for nearly 2000 years, recent history has prevented the two groups from living together. Israelis and Palestinians formed different interpretations of The UN Plan for Palestine and the subsequent 1948 War. While Israelis saw the partition and war as creating a state of Israel, the Palestinians believed their party had no input on the plan and viewed the war as a catastrophe. However, an IDF soldier in the audience mentioned that the 1948 war, and other periods of violence like the Holocaust, wouldn't have occurred unless the Jewish people had a homeland. He argued that a two-state solution wouldn't be sufficient to end future wars, as Israelis would live in constant fear of the next catastrophe.

Another complication is the security barrier between Israel and Palestine. To show us a safe security barrier, our tour guide, Rom, took us to the Golan Heights, a border region captured from Syria by Israel during the Six-Day War. Israel recognizes the Golan Heights as under its jurisdiction. However, in Resolution 297, the United Nations doesn't condone Israel's "laws, jurisdiction, and administration" in the Golan Heights. But in 2019, Donald Trump stated that the United States recognized the Golan Heights as part of Israel. Our Israeli tour guide, Rom, mentions how the Golan Heights serves as a much-needed boundary between Syria and Israel and provides security to the many settlements and kibbutz communities near the Galilea Sea. From an educational perspective, it was riveting to learn this history from our tour guide while being physically present at the Syrian and Israel border. While one can hear the same narrative from textbooks and online, it was striking to observe how the peaceful territory sharply contrasts the terrorism and civil unrest in the West Bank.

During our last day in Tiberius, we were introduced to Sindyanna of Galilee, a non-profit organization led by a team of Arab and Jewish women to create social change. Sindyanna produces olive oil, which provides jobs to many Arab women. By cooperating with other organizations, Sindyanna reclaimed lands and transformed them into Israel’s first Jewish-Arab organic and regular olive groves. While we were exposed to many di????erent groups during our trip, this was the first organization that sponsored Palestinian representation. I was intent to learn about how the two-state solution could impact Palestinian’s abilities to create meaningful lives was a much needed. At Sindyanna, the Arab women discussed how the unique perspective on the two-state solution. While many Arabs would like to be economically independent, the Arab women who work at Sindyanna expressed gratitude for collaborating with Israeli colleagues at Sindyanna. Until recently, Arab farmers relied on the Souri olive cultivar, a land without irrigation, which leads to suboptimal produce. But with this trust-building cooperation, Sindyanna allows for better products, and thus better jobs, for Arab women. Thus, Arab women at Sindyanna feared that a two-state solution wouldn’t inspire collaboration between Jews and Israelis, and thus would result in stalled economic growth for Palestine.
After four nights in Tiberius, we stayed at Umm al Khair in the West Bank, a Bedouin campsite in the south. I met Eleni, an American, on another Birthright trip whose family lives in Israel. Because Eleni's father lives in Tel Aviv but works in the West Bank, he's not allowed to go into areas A and has limited access to area B. Eleni expressed that movement restrictions place undue stress on her father, who must commute to his job to provide for his family. She worried that a two-state solution might restrict her father from entering area B. To educate herself, Eleni stays up to date with news sources like Haaretz or Times of Israel that document how movement trends in the West Bank are evolving.

Later in the trip, the leader of Hillel Birthright welcomed our group to Jerusalem. Upon arrival, IDF soldiers greeted our Birthright group with singing, dancing, and challah. I pulled one IDF soldier aside to talk. She remarked that Jerusalem is Israel's capitol but recognized that Palestinians also claim eastern Jerusalem as their capitol. She worried about how a two-state solution will impact Jerusalem's Israeli spirit. Since Israel claims Jerusalem as its undivided capitol, the two-state solution threatens this perception, negatively affecting the Israelis' sense of stability.

Arguably most dangerously affecting the well-being of Israelis is terrorism and Palestinian threats. While some Israelis approach conscription with pride, Palestinian terrorism threatens young Israeli life. When an Israeli turns 18, enlisting in the IDF is obligatory. Citizens must serve a minimum required length of two years and eight months. When visiting Mount Zion, our group witnessed hundreds of graves of IDF soldiers who lost their lives on duty. Petrov, our Birghtright security officer, reflects on his time in the IDF. While I knew of these conscription laws before getting to Israel, hearing Petrov's story at Mount Zion anecdotally demonstrated how differently Israeli youth experience their early 20s. During Petrov's service, his friend lost his life serving as a border patrol agent. Petrov mentioned that speaking to other youth who also lost close friends in the IDF helped him come to terms with his loss and provided him with a community. If a two-state solution passes, Petrov is fearful that the borders will become even more hostile and dangerous for IDF youth.

Upon leaving Israel, I reflect on the positive memories I made with my Birthright group and Israelis. After the trip, I feel more connected to Judaism and more aware of Israeli history. However, I can't help but agree with the current UN sentiment of a looming Israel-Palestinian all-out war. The Israelis' consistent unfavorable reaction to the two-state solution makes me worry for their well-being. If you qualify for Birthright or have been wanting to visit Israel, I strongly suggest visiting. Learning about the state's history on its grounds and with its people presents an unparalleled method of deepening one's emotional and intellectual understanding of the unfolding conflict. Suppose you don't have access to do this and want to learn about the con????ict from an Israeli perspective. In that case, I suggest listening to Israel by Noa Tishby or reading about current Israeli events on Haaretz or Times of Israel.