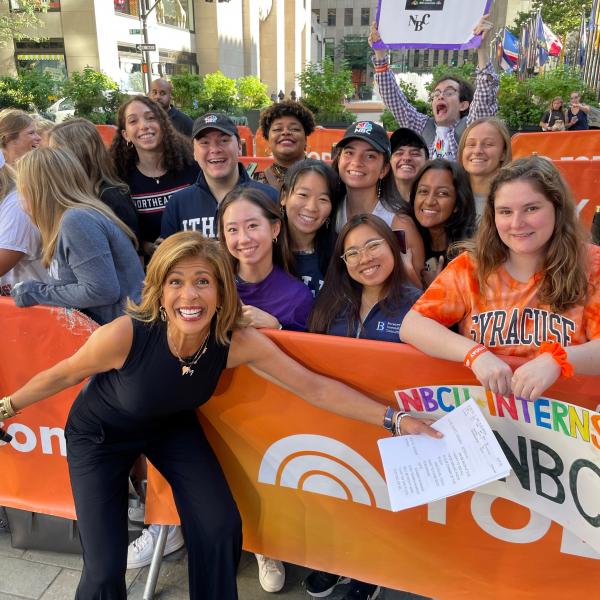 Summer 2022 was a busy one for Milken Scholars.  As the world returned to in-person activities and workplaces relaunched their in-office internships, we had the pleasure of hearing from several of our Scholars on their experiences this summer.  Read below to learn about internships in banking, education policy, coding, DEI, materials science research- in the U.S. and abroad!

Nathan Varghese, MS ’21- Nathan applied and was selected for a Research Experience for Undergraduates (REU) at the Center for Complex and Active Materials (CCAM).  This was an 8-week materials science research program funded by the National Science Foundation and hosted at the University of California, Irvine. All REU participants were matched with CCAM faculty and graduate student mentors.  Nathan attended CCAM faculty presentations to learn more about their research focused on discovering new materials and novel functionalities through structural design and molecular-scale control.  At the conclusion of the program, Nathan had the opportunity to showcase his research completed over these 8 weeks where he used replica-exchange molecular dynamics simulations to determine a potential pathway for the self-assembly of conductive protein fibers, which are the basis for future stimuli-responsive nanomaterials.  His work was showcased at the UCI Summer Research Poster Symposium.  This paid experience also included extracurricular activities including a hiking trip from the Crystal Cove Hills to the beach which Nathan enjoyed!

Waly Ndiaye, MS ’20- Over the course of a month, Waly participated as a Computer Science Instructor with the Middle East Entrepreneurs of Tomorrow (MEET) in Israel.  After completing a competitive application process which consisted of some essays and interviews, MIT’s International Opportunities Program invited him to offer introductory Python lectures to a bi-national group of Israeli and Palestinian high school students.  Waly taught concepts ranging from conditionals to functions and he even held Office Hours for students to get extra help with finishing labs and to better understand concepts.  The students’ final group project required them to create a Python Turtle game related to the environment!  Waly really enjoyed this international opportunity and it was an incredibly fulfilling experience to see students’ improvement in their Python skills and their confidence in general.  STEM majors, find these opportunities to spend some time abroad!

Hanah Jun, MS ’19- For 10 weeks Hanah served as an Investment Banking Summer Analyst for Centerview Partners in New York City.  This was a paid position that she learned about through mentors at Yale.  Although the investment banking application process was probably “one of the hardest things to do” for the role, she was selected amongst a very competitive pool of applicants and she really enjoyed her time there.  Some of her responsibilities included working on M&A deals across multiple industries and working closely with senior bankers putting together model components, quantitative analyses and slide decks which required both quantitative and qualitative critical thinking.  Despite having heard so many horror stories of the banking sector, Hanah really enjoyed how intellectually stimulating her work was.  She was also very surprised by the degree of creativity required by the job! During this time, she found herself very interested in the way transactions were conceptualized and structured, and how different personalities came into play in deals.  At the conclusion of her experience, Hanah received a full-time job offer to return to upon graduation!

Christian Robles, MS ’19- Christian accepted a 10-week role with the National Coalition on School Diversity (NCSD) in Washington, D.C.  Although it was an unpaid position, his opportunity was financed by the Yale Summer Experience Award.  In his role, Christian supported NCSD’s federal advocacy efforts by producing a factsheet of resources for school district leaders and attending weekly meetings with the coalitions lobbying firm.  Christian authored a 3,700-word chapter on the intersection of housing/school policy where he critiqued federal policies such as the Magnet School Assistance Program and local policies such as the housing mobility efforts.  Finally, Christian supported NCSD’s communications efforts by pitching clips about education policies in “gentrifying cities” and authoring an Op-Ed about why business leaders should support the modern school integration movement.  This was only the 2nd year that NCSD has welcomed summer interns, but Christian enjoyed his time there and spending time with other interns (despite a hybrid remote/in-person model), so he would encourage Scholars to consider the opportunity for future years.

Karen Li, MS ’18- NBC Universal Media, LLC welcomed Karen for a 10-week opportunity as the Diversity, Equity and Inclusion Intern in its New York City office.  This was a paid role she found and applied to via LinkedIn! After two rounds of virtual interviews, Karen was invited to support in various areas which included regularly communicating and maintaining relationships with 100+ Employee Resource Group leaders and diversity practitioners across the company, nationally.  She assisted the data analytics team in producing a report detailing landscape analysis of workforce diversity data comparing NBC Universal to other key media competitors and she also created user experience decks of online portals and applications, such as Greenfly, that were released to hundreds of staff in order to facilitate the implementation of new workflows.  Not only did Karen love learning more about Corporate DEI and the various roles on the ream, she also really enjoyed meeting such wonderful co-workers and she can’t complain about the perks for working with NBCU (including being on the TODAY show)! Ask her about these and the 500+ internship opportunities for the summer, fall and winter.