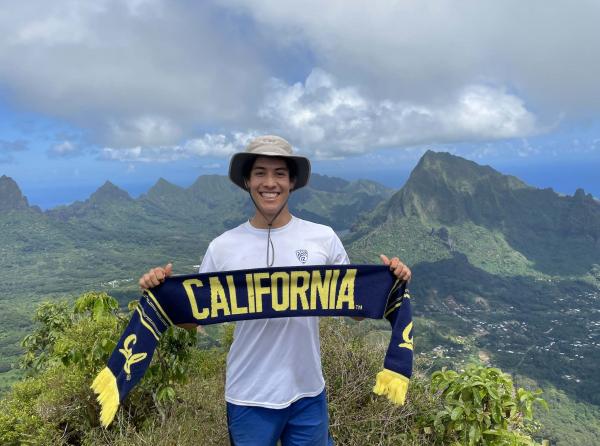 There is a world of difference between viewing the Pacific as “islands in a far sea” and as “a sea of islands.” (Epeli Hau‘ofa, Our Sea of Islands)

While a single quote cannot do justice to summarizing the lessons I learned from my spring semester studying abroad in French Polynesia, this passage captures the powerful notion that for centuries, Oceania has existed as a thriving and diverse land and seascape, but through the consequences of European colonialism, oppressive militarism, and exploitive globalization, the region has been changed, altered, and continues to deal with these enduring legacies. As someone who recently had the privilege of traveling to and living within the region during the months of January, February, and March 2022, I had the unique opportunity to study a wide range of academic topics relating to island sustainability, while learning in an international educational context that exposed me to hands-on fieldwork, practical analytical research, and local traditional ecological knowledge. My time abroad was life-changing, and I honor the experience I made by passing on the many lessons that I learned to others.

As a participant in the inaugural cohort of the Island Sustainability Program (ISP) hosted by the University of California, Berkeley, I had little idea about what I was exactly getting myself into when I applied. Despite turning in my application late due to a previous study abroad program being canceled as a result of COVID-19 concerns, I must have been exactly the type of person ISP was looking for because that same day of my application, I was pleasantly surprised to hear that I had been accepted. This theme of surprises would underline my time studying abroad, contributing to moments of pure excitement along with periods of unforeseen stress. My experience overseas would allow me to venture to all-time new heights (sometimes quite literally), like when I got to hike Mount Rotui, one of the tallest peaks in the South Pacific, but it would also challenge me to navigate difficult life events, like when I tested positive for COVID-19 on the last week of the program and had to push back all my travel and lodging arrangements. However, it was these experiences––summiting mountains in the middle of the Pacific and being in hour-long conversations with my travel insurance––that gave me memories to last a lifetime and proved to me that education can be even more powerful when it is fun.

What started out as a group of 21 curious individuals visiting a foreign country evolved into a close-knit family of over two dozen members––which grew to include both students and faculty––studying in a new forever home. French Polynesia, with all its natural beauty and welcoming people, proved to be a true ‘paradise of Earth’ for all of us. However, this can be a relatively easy statement to make when the itinerary consists of a month of fieldwork on the remote private island of Tetiaroa followed by two months of hands-on learning on the tropical high islands of Tahiti and Mo’orea. A typical day began with an early morning wake up to catch a light breakfast that was served daily at 7:00 AM in our communal kitchen/dining space. On any given morning, breakfast would consist of local French cuisine that included sliced cheeses with carved deli meats, baguettes served with either Nutella or a concoction of fresh fruit jams, and on really good days, freshly baked chocolate croissants. Once finished, depending on the week and who was teaching, we would either begin our first half with lectures talking about Polynesian culture or discussing environmental planning, or we would kick off the day with a boat ride to a nearby islet. Lecture days took place in the classroom, but while we were all together and before any formal teaching began, we would kick off every instructional session with our daily ‘community chat.’ These regular check-in conversations allowed for students to bring up concerns in shared spaces, ask questions about program logistics, and perhaps most importantly, award ‘gold stars’ to those who did commemorable acts of kindness. For what began as an idea that we would test out and see how it worked, these community chats served as the foundation for our cohort to grow stronger and allowed us to effectively communicate in a setting that was overwhelmingly supportive and relatively productive. On days that took place on the water or in the field, we would prepare by wearing extreme amounts of sunscreen to prevent sunburn and applying generous amounts of bug repellent to deter mosquites. Common field days included carrying out transects by foot to collect invertebrate samples and hermit crab data that would later be used to measure and compare biodiversity, or trips to a new part of the island to conduct field observations that would end up becoming collected data to later be used for analysis. After a quick lunch, days would usually conclude with some dedicated time for leisure and recreation, which on a tropical island usually meant snorkeling in the water or laying on the beach.

Depending on the day, we would also include in the schedule a Tahitian language or dance lesson, thanks largely in part to having a local teaching assistant with us who just so happened to be born and raised in French Polynesia and was a local language and dance expert. By dinner, we would all be exhausted by the day’s activities and content with the reality that this daily routine was our new reality. In the eyes of critics, we were on vacation with school happening in the background, but if you were to ask anyone in the program, we were students learning in nature who just happened to be studying some incredibly exciting topics that ranged from learning about sustainability to conservation to anthropology to data science.

Study abroad opportunities, like the one I got to experience with my colleagues in French Polynesia, enable students to build meaningful lives in an international context. By emmersing myself in an overseas study program and stepping outside of my comfort zone, I learned not only how to survive in another country, but also how to live amongst a new language, eat an entirely different cuisine, and make friends in a different country. My program allowed me to building these meaningful experiences while also researching topics related to biodiversity conservation, environmental planning, and cultural preservation. As a part of the inagural ISP group, the field work I conducted and professional relationship I helped build will provide a foundation for future study groups
to adopt and similarly immerse themselves in the culture and natural beauty of Mo’orea, ultimately allowing them to also leave a mutual benefitial impact on both the local community and environment. If I never got to leave the classroom at UC Berkeley and go abroad, I would not have been able to experience the process of carrying out intense field work that requires following an experienced guide with a machete as we conducted transects in the thick forests of French Polynesias remote islands or hear from groundbreaking researchers conducting long-term studies on the resilience of Mo’orea’s coral reefs as they adapt to the threats of climate change. Futhermore, I would not have been able to travel abroad or engage in overseas educational opportunities without the financial aid and academic resources that are provided by those who support higher education. Scholarships and grants enable those who are less fortunate to participate in programs that create ever-expanding opportunities, and these experiences not only improve themselves but also their broader communities. I have been fortunate enough to pursue a widely productive and immensely satisfying undergraduate education thanks largely in part to the financial support I have received from others, like the Milken Scholars Program, and I am indebted to those that have helped me get to where I am today. While I am not currently in a position to provide significant financial support, I am paying it forward for the next generation through mentorship and advising others of the wide-ranging educational opportunities that may exist for them. I am challenging my peers to be ambitious and daring, yet also compassionate because, at the end of the day, all we have is each other, and I believe we have a collective responsibility to leave our communities better than how we found them. 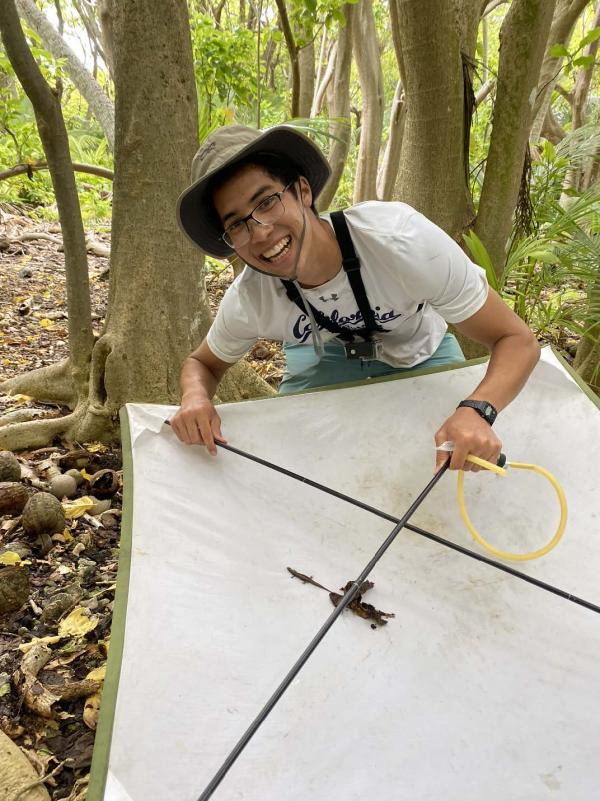 Here I am catching a lizard on a white sheet that is being held open with modified tent poles after hiking on an island that exists in the middle of the Pacific. Conducting research can be very cool!