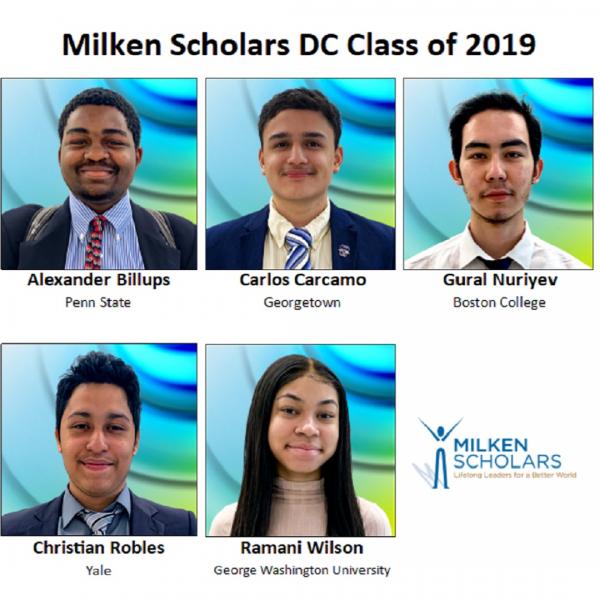 SANTA MONICA, Calif., (June 4, 2019)—The Milken Scholars, a joint initiative of the Milken Institute and the Milken Family Foundation, has chosen five talented students from Washington, D.C. for its 2019 scholarship program after a rigorous nomination, application and interview process. Open to college-bound high school seniors in New York City, Los Angeles County and Washington, D.C., Milken Scholars are selected based on academic performance, community service, leadership and their ability to persevere in the face of personal challenges.

“The Milken Scholars Program provides crucial mentoring and other resources to the recipients of the award,” said Simone Friedman of EJF Philanthropies, which sponsors the D.C. Milken Scholars. “This is just one of the reasons why we enthusiastically support this program.”

“In the nearly three decades since Lori and I cofounded the Milken Scholars program, these leaders of tomorrow have consistently inspired us by their achievements, leadership and dedication to service,” said Milken Institute Chairman Mike Milken. “This year’s class of outstanding Washington, D.C. Scholars is no exception. In welcoming them to the Milken Scholars family, we are confident they can change the world.”

Alexander Billups, a graduate of Gonzaga College High School in Washington, D.C., works hard to fight food insecurity. As a member of Campus Kitchen, which prepares and delivers meals for elderly residents in his community, Alex coordinated deliveries and retrieves leftovers from local stores and events. He volunteered at the McKenna Center, a homeless shelter, cooking meals and helping residents shop for food. When Alex discovered that students at Gonzaga were going hungry because they lacked funds to buy meals in the cafeteria, he worked with administrators to create a lunch program for low-income students.

Alex is a QuestBridge National Match Finalist, QuestBridge College Prep Scholar and Posse Foundation Semifinalist. He is a member of the National Honor Society and received the United States Senate Youth Program Scholarship. Alex served as class representative for student government and co-captain of the Gonzaga Retreat Team, leading spiritual retreats for younger students. He was secretary of the Onyx Club, promoting equal rights for minorities and raising Gonzaga’s awareness of black culture.

Alex co-captained Gonzaga’s varsity rugby team, which won the National High School Rugby Championship. He was vice president of the Gonzaga Book Club, earning a Volunteer Cum Laude award from the Christ Child Society for fighting illiteracy in minority communities. Last summer, Alex spent a week tutoring students at the Red Cloud Indian School in Pine Ridge, South Dakota. A junior aide for Children & Charity International, Alex learned C++ and coding with students at University of the District of Columbia; his team developed an app to measure the size of buildings using a portable laser. During an internship with the National Institutes of Health, Alex tested the efficacy of a new drug in a neurological disorders lab.

Alex will study computer science at Penn State and plans a career in computer programming and game design.

Carlos Carcamo, a graduate of Gonzaga College High School in Washington, D.C., is a fierce advocate for immigrants. Last summer, he and a group from Gonzaga went to the U.S.-Mexico border for a firsthand look at the issues and tensions that have been in the headlines. Carlos came back determined to find a way to get the asylum seekers the help and advocacy they needed. He co-founded the Kino Border Initiative Club to raise awareness of the humanitarian issues at the border and collected more than 2,000 pairs of jeans for immigrants during three days of clothing drives. Carlos is an AP Scholar with Distinction and a member of the National Honor Society, Spanish Honor Society and National Hispanic College Recognition program. The founder of the Latino Student Organization, Carlos helped Latino students fit in and grow within the Gonzaga community. He cooked, packed and delivered lunches for homeless and elderly community members at the McKenna Center, Gonzaga’s on-campus soup kitchen. Carlos worked with Reading Partner DC to help children build literacy skills and planned Sunday school lessons at his church.

During the Smithsonian Youth Engagement through Science (YES!) Internship, Carlos worked with a museum curator specializing in anthropology. He worked on new exhibits and researched outreach strategies to attract teens, which he presented to curators and other museum guests. As a land use intern with Lerch, Early & Brewer, a D.C.-area law firm, he filed case documents and researched potential development projects.

Carlos will study business at Georgetown University and plans to become a lawyer.

When Gural Nuriyev arrived in the U.S. from Turkmenistan in 2017, he brought a wealth of experience in competitive computer programming. A graduate of School Without Walls Senior High School in Washington, D.C., Gural had studied computer programming for four years at an elite academic school in Ashgabat, Turkmenistan’s capital. When personnel issues left the program without an instructor in his second year, Gural stepped in and led the classes. He won the 2017 National Olympiad in Informatics and qualified for the International level of the competition. When he began at School Without Walls as a junior, Gural introduced competitive coding to the Programming Club. As co-leader, he led the team to first place at the Biotech Computer Science and Biology Olympiad.

Although Gural’s English was limited when he immigrated, he has pursued a challenging curriculum to jump-start his language skills. He has excelled in Advanced Placement classes in both English language and literature. Gural studied economics and accounting at Harvard through the Office of the State Superintendent (OSSE) Scholars, which sends eligible D.C. sophomores and juniors to summer programs at elite universities. He has also studied public speaking and calculus at George Washington University. Gural is an accomplished violinist, plays in the school band, and serves on the Kennedy Center Youth Council, promoting the arts and hosting performances for his peers.

As an intern in the financial department of the American Council for International Education, Gural completed routine accounting operations under the supervision of the chief financial officer and created software to meet department needs. He works 40 hours per week at restaurants to cover housing and other living expenses for himself and his mother.

Gural will study economics and computer science at Boston College and plans a career in business.

Politics and community organizing play a central role for Christian Robles, a graduate of School Without Walls Senior High School in Washington, D.C. As a Democracy Summer Fellow for Maryland U.S. Representative Jamie Raskin, Christian researched policy issues to create effective arguments for canvassing and lobbying. He advocated for bills that would drop the voting age to 16 and increase funding for the YMCA’s Youth and Government (YAG) program, for which he served as D.C. Youth Mayor. As Youth Mayor, Christian led club meetings and citywide advisory board meetings, wrote mock bills for training conferences, addressed YMCA donors, and helped new members develop research, writing and public speaking skills. With Our Voices Matter, Christian registered voters in low-turnout areas of Maryland’s Montgomery County and organized leadership development trainings and candidate forums.

Christian is a member of the National Honor Society and National Hispanic Recognition Program. He was a delegate to the Conference on National Affairs and has attended many Model United Nations conferences, earning multiple awards. Christian entered George Washington University’s dual-enrollment program in 2017, taking courses in writing, calculus, political science, Spanish and English literature, history and ecology. He was the keynote speaker for GWU’s University Writing Conference and was placed on the Dean’s List.

The editor of The Rookery, his high school newspaper, Christian assigned, edited and wrote stories; he also led the publication’s transition to newsprint. As sophomore class president, he led fundraising efforts that brought in $3,000, toward graduation and prom expenses for that year’s graduates. He helped middle schoolers prepare for high school as a student assistant for Operacion Impacto and planned an all-day fair for 12,000 undergraduates at GWU as organizer for the Cesar Chavez-Dolores Huerta Committee.

Christian will study political science at Yale and plans a career in law.

Ramani Wilson, the salutatorian at Benjamin Banneker Senior High School in Washington, D.C., is committed to improving the lives of her peers, especially young women. Elected to D.C.’s Young Women’s Advisory Council, Ramani was recognized by councilmember Kenyan McDuffie for her focus on gun violence and education issues. She helped develop the “Blueprints for Action” that guide the group’s research, grantmaking and advocacy efforts. Ramani spoke at the United State of Women Summit in Los Angeles in front of thousands of people, including former First Lady Michelle Obama. She was elected the Ward 4 representative for former D.C. Mayor Marion Barry’s Youth Government Association, won first place in the Marion Barry Oratorical Contest, and was chosen to speak at the unveiling of Barry’s statue at City Hall.

Ramani is an AP Scholar with Distinction and a member of the National Honor Society, Hispanic Honor Society and Mu Alpha Theta Honor Society. She won first place for chemistry in Banneker’s Science Fair, earned honors for essay writing and poetry from Black Swan Academy, and received the Marion Barry Youth Leadership Initiative Award. Ramani celebrated Banneker’s diverse cultures as president of the International Club, tutored math as vice president of the Mu Alpha Theta Society, and volunteered at her middle school and a local community center. She traveled to Morocco with the District of Columbia Public Schools Study Abroad Program, studied in Italy and France, and will attend the Global Kids Educational Program in South Africa.

As a program assistant for Saving Adolescent Girls Everywhere (SAGE), a nonprofit for teen girls from underserved communities, Ramani helped develop programs focused on teen pregnancy, domestic violence, human trafficking and body image. She was featured in an Australian documentary that showcased the stories of girls around the world.

Ramani will study international affairs at George Washington University and plans a career abroad as an entrepreneur.

As of 2019, more than 450 Milken Scholars have been selected from over 180 high schools in Los Angeles County, New York City and Washington, D.C. Milken Scholars embody a variety of ages, backgrounds, and academic and professional interests, and represent elite colleges and universities in the country. Twenty-five percent were born outside the United States and 75 percent have parents originating from 71 countries. Over half were the first in their family to attend college.

Throughout their college careers, Scholars are in regular communication with Scholars staff and each other. They meet with Foundation staff and mentors during campus visits and special events, including an annual Summit that provides guidance and insights through speakers, panels and activities. These resources create a setting that propels these exceptional youth into a position where they can achieve their personal, academic and professional goals and, in the process, become lifelong leaders for a better world.

For more information about the Milken Scholars Program, visit www.MilkenScholars.org.