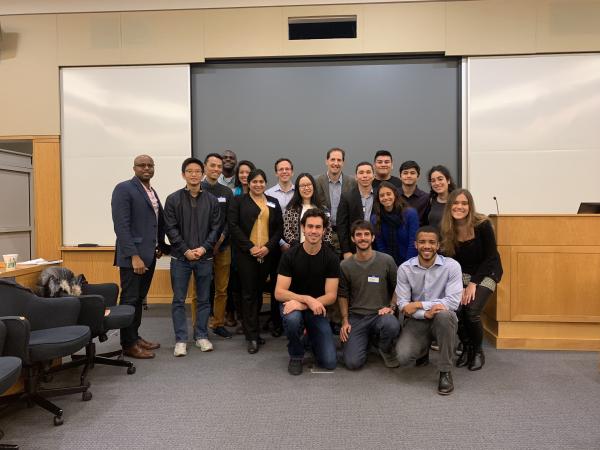 Imagine: You had a long, frustrating day at work and you’re looking forward to unwinding at home. You enter the front door and are greeted by your two young nieces engaged in a tug-o-war over the last orange. Their shrill cries claiming ownership of the orange crescendo as the tug-o-war continues. No relaxation to be had here. You’re an adult, surely you can mediate this minor conflict. What do you do?

Perhaps you attempt a compromise: “Why don’t you both share the orange?”

Perhaps you give an ultimatum: “If you can’t share, no one gets the orange!”

Or, perhaps you ask each girl why they want the orange.

In an exciting case study, presented to scholars from three prestigious scholarship organizations this past November, Professor Daniel Shapiro, Founder and Director of the Harvard International Negotiation Program, outlined how the “why” in a situation is the most important question when the aim is mutual gain.

Often, we imagine negotiations as Hollywood scenes—high-powered individuals in sharp suits dealing in numbers for the benefit of their company. Or, perhaps as news reels depicting visiting dignitaries seeking to advance their nation’s aims. But, Professor Shapiro notes that negotiations are much more common, permeating all areas of our daily life and easily influenced by our emotions. Even a discussion over where to go for dinner can become a heated negotiation colored by varied sentiments and informed by past experiences.

Because of the everyday pervasiveness of negotiation, it is not only business and world leaders who need to be versed in this, but all of us. In our highly social world, we need to know the pitfalls to successful negotiations so that we can avoid getting mired in emotionally charged conflicts that can be harmful both personally and professionally.

Charismatically engaging his audience, Professor Shapiro gave the Milken Scholars and scholars from Fundação Estudar and Fundação Lemann (two programs dedicated to developing the next leaders of Brazil), a thought-provoking lesson in how rationality is not enough because emotions are always in play. Asking, “why?” will bring us closer to more fully understanding what each party is bringing to the table and give us insight into how to achieve mutual gain. The Milken Scholars Program is committed to developing Lifelong Leaders for a Better World and in this joint event with Fundação Estudar and Fundação Lemann all three programs have learned valuable lessons regarding the art of negotiation.

As we parted with a copy of his book, Negotiating the Nonnegotiable, Professor Shapiro reminded us that although we may be conditioned to view the other negotiating party as an adversary, the problem is not the other team, the problem is the situation at hand. Professor Shapiro stated that all too often, parties enter a negotiation with the mistaken assumption that one party must win, while the other must lose—a zero-sum game.  He encouraged us to think creatively about solutions for the situation at hand, so that all parties can come out as winners.