A Beacon of Hope: Alumni Scholars at the Milken Institute Global Conference 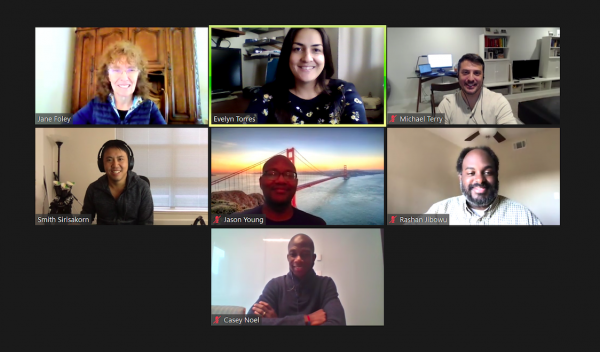 As it became clear that large gatherings and international travel would be impossible in 2020, the Milken Institute Global Conference had to adapt. From large convention center rooms in Beverly Hills to tiny home computer screen Zooms around the world, the Global Conference took on a whole new virtual face in October.

The annual summit consistently features hundreds of larger-than-life names in various fields — from technology moguls to Olympians, national government officials to Hollywood movie stars. Tickets start at $15,000 for a chance to interact with the high-profile speakers and panelists present.

But Milken Scholars get a unique opportunity to attend. For every conference, Alumni Scholars can apply for a limited number of tickets at no cost. A few months before the annual Milken Scholars Summit, the Program sends out a short application asking about interest in the Global Conference and whether there is career relevance to the Scholar. Once selected, the Alumni Scholar is ready for a week of global engagement. So what did this year’s conference look like? This is what the seven Milken Alumni Scholars selected for the 2020 Milken Institute Global Conference had to say:

“It's not every day that I can sit in on a panel with the CEO of Starbucks, Mastercard, and President of Walmart International!” remarked Yihwan Kim, MS ‘09, who was a first-time attendee to the Conference.

With the overarching theme of “Meeting the Moment” in a period of widespread health risks, social injustice, and polarized politics, this year’s Global Conference focused on addressing the pressing questions of the now. Under this umbrella, many of the speakers centered presentations around equity, inclusion, and justice throughout all sectors – public and private.

“The Conference gave me hope during the session titled Breaking the Cycle of Mass Incarceration,” said Rashan Jibowu, MS ‘02. “Not only was the hip-hop artist Common one of the panelists, but even more impressive was Topeka Sam, who is currently the Founder and Executive Director of The Ladies of Hope Ministries and was previously incarcerated herself.”

“I was inspired to hear Black business luminaries Melody Hobson and Robert Smith talk about the actions that they and other business leaders are taking to extend the ladder of opportunity to future generations,” said Jason Young, MS ’00. “When you put together the panels on mass incarceration and racial equity you get a range of perspectives from the ground to the boardroom on changes that need to be made.”

The conference also adapted an interdisciplinary approach to find solutions for the COVID-19 crisis. “I began to see a common thread on how the tie between health and economics and politics has never been greater leading up to the pandemic,” reflected Michael Terry, MS ‘00. “I was excited to learn specifically how leaders in nonprofits, government and enterprise were navigating this world amid the new norms.”

Social inequity and pandemic updates were only the tip of the iceberg—other topics discussed were just as relevant to current issues and attendee’s day-to-day careers. For Nuria Santamaria Wolfe, MS ‘01, the co-founder of the direct-to-consumer, digital-first media and education company Encantos, “The session Leading Companies Through the New Digital Reality particularly resonated with me...  It reassured me that the way we have been leading our company has positioned us to not only survive but to thrive during this time.”

“I also learned some new tidbits from a few of my sports heroes such as Richard Sherman and Chris Paul as they delivered messages about sports as a platform for justice and equality,” said Terry. “Closing out the conference, I got a laugh or two out of Gavin Newsom’s pro-California fireside chat. I ended the week feeling encouraged for California’s continued commitment to sustainability while maintaining its dominance in industries like entertainment and Silicon Valley.”

Another way the Conference “met the moment” was transitioning seamlessly to an online platform with an interactive app and website. “I intended to have an inspirational experience of rubbing shoulders with the sharpest thinkers and practitioners across the globe,” reflected Casey Noel, MS ‘97, another Alumni Scholar invited to the Conference. “I experienced that but in a different way than I had planned — the conference went virtual so I was not rubbing shoulders literally. Instead, I was having face-to-face, computer screen-to-computer screen encounters with luminaries from every major industry.”

Jibowu agreed. “The virtual format compensated by removing from view the hustle and bustle of the in-person conference and brought the speakers directly into my home,” he said. “I enjoyed hearing unscripted, genuine views on these topics from leading political figures.”

Smith Sirisakorn, MS ’00, looked back on his experience with a reminder to all of the young Alumni Scholars still getting a grasp of their career field: “I wish I had attended a Global Conference earlier in my life. I was 36 for my first one, and I think I would have gained so much from it as someone just starting out in my career,” he said. “Attending a Global Conference is a privilege that I insist every Milken Scholar experience at some point in their life.”

The amount and breadth of attendees made networking easy. “Leaning into my experience with apps and technology, I decided to make a full-fledged effort to reach out to dozens of members of the technology investment community via the app and web site," said Terry. “I am proud to share that I have three investor meetings lined up as a result of my outreach during the conference.”

And Noel remarked on the overlap of missions with both the Global Conference and the Scholars Program. “Having access to a variety of intelligent people across a variety of topics stayed true to the Milken Scholar philosophy of being a lifelong Scholar. Being able to tie conversations to your personal and professional aspirations makes it like no other conference that one can attend.”

Every year, the discussions are a beacon of forward-looking innovation, and this year was no exception. “While I see and feel changes in my daily personal and professional life every day, it was quite impactful to hear leaders, one after the other, share the magnitude of the transformation within their respective fields,” said Wolfe. “I walked away confident that the world will never be the same but hopeful that it will be better than it was before 2020.”

Terry found that inspiration in a single speaker. “In the closing plenary, I found great solace in seeing the subtlety between blind optimism and hope.  A simple quote from Francis Collins of the NIH said it all: ‘Hope is the belief that we can make the world better.’”