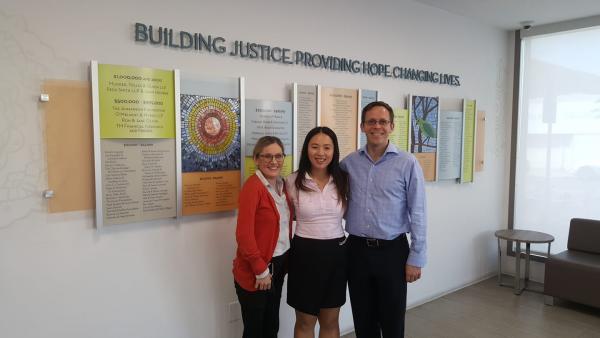 Pictured above: Nicole Perez, '97, Shao Zhao, '14, and Andrew Michaels in the main lobby of LAFLA.

Two Alumni Scholars who graduated seventeen years apart are now working together at the main office and headquarters of the Legal Aid Foundation of Los Angeles (“LAFLA”).  Nicole Perez, ’97, is a Managing Attorney of the Veterans Justice Center at LAFLA, where she has worked for the past eleven years.  Shao Zhao, ’14, joined LAFLA in August of 2018 as a paralegal, and she will continue working at LAFLA until she matriculates in law school.  Nicole and Shao are driven by a similar passion—a strong desire to serve the underserved in their hometown of Los Angeles.

LAFLA provides free legal counsel to low-income individuals in person, online, and over-the-phone.  The multiple communication modalities ensure that LAFLA can serve as many individuals as possible, as its services are in high demand.  Nicole and Shao help LAFLA to assist more than 80,000 clients each year.

Nicole played a major role in a recent capital campaign that allowed LAFLA to expand its capacity and build a state-of-the-art law office building, which broke ground one year ago at 1550 W. 8th Street near downtown Los Angeles.  LAFLA’s main office now has four dedicated private intake rooms, which allow its attorneys to provide in-person services to clients in a confidential setting.  The four-story building also has a beautiful top-floor conference room for hosting community workshops.

Nicole and Shao only recently realized that they were both Milken Scholars.  It was a welcome surprise to know that they had something truly special in common.  Yet, they are not the only two Scholars to have worked at LAFLA.  Debbie Park, '15, spent this past summer interning at LAFLA.  Perhaps it should come as no surprise that at least three Milken Scholars have worked at LAFLA.  All Milken Scholars have demonstrated an exemplary commitment to their communities, and law is one of the top five most popular professions amongst our Scholars.  In fact, 27 Scholars have earned a JD, five are currently in law school, and at least ten of our undergraduates and recent graduates are interested in pursuing a law degree.

Nicole and Shao hope that additional Scholars will consider interning at LAFLA during their college years or working at LAFLA following undergraduate studies or law school.  Indeed, LAFLA will likely be on the search for top talent over the next few years as it is growing—the main office where Nicole and Shao work recently hired four new paralegals.  But the downtown office is not LAFLA’s only location—it also has regional offices in East Los Angeles, South Los Angeles, Long Beach, and Santa Monica (not too far from the Milken Institute’s headquarters).

For those interested in the work of LAFLA, Shao’s experience is informative.  She has spent much of her time thus far assisting Asian and Pacific Islander (API) clients.  Her bilingual skills have proven to be a huge asset, as language barriers often preclude individuals from attaining effective legal counsel.  In addition to working with the API Community Outreach Project of LAFLA, Shao has also completed a rotation with the Supporting Families Workgroup and she is currently working on a rotation with the Housing Workgroup.  LAFLA has a variety of other workgroups, including the Economic Stability Workgroup, which focuses on government benefits, student loans, and consumer rights.  Shao enjoys the rotational model, as she will gain exposure to a variety of areas in her time at LAFLA.

For Nicole, working at LAFLA has been her life’s passion.  After graduating from UCLA in 2007 with a Master’s in Social Work and a Juris Doctorate, she took a position at LAFLA and has never looked back.  LAFLA provided Nicole with an ideal setting to combine her love of social work and the law, along with her passion for directly serving others.  She has assisted thousands of veterans and disabled individuals in their pursuit of justice.

Through their work at LAFLA, Nicole and Shao have brought meaning to the Milken Scholars motto: Lifelong Leaders for a Better World.