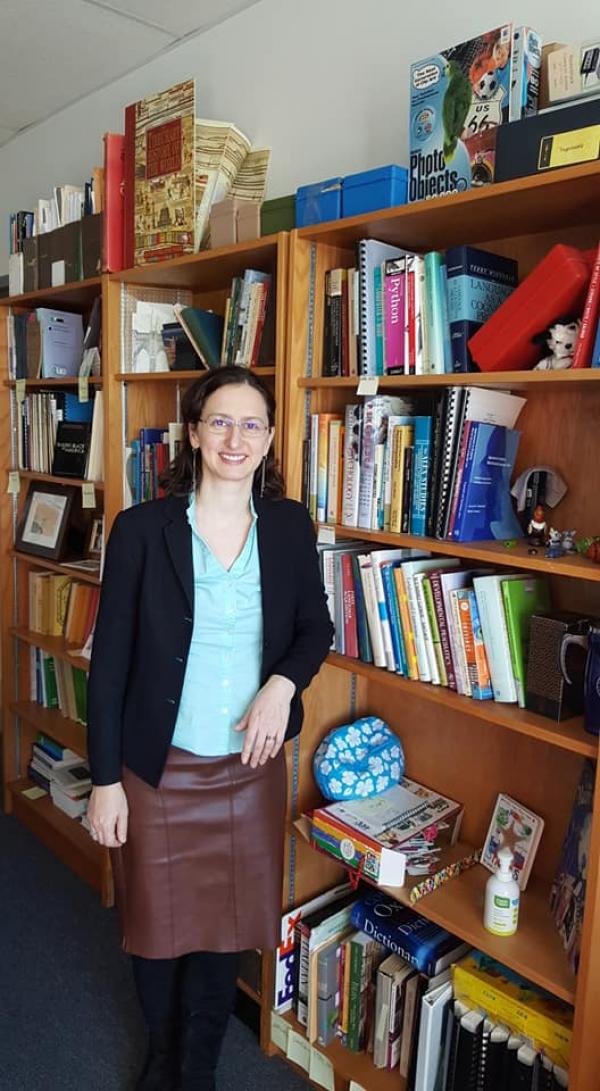 Sophia Malamud loves language.  In fact, this trilingual Milken Scholar—who immigrated from Ukraine to New York City shortly after the fall of the Iron Curtain—loves language so much that she decided to pursue the science of language as a career.  In 2006, immediately after receiving her Ph.D. in linguistics, she attained a faculty position at Brandeis University, where she currently holds the title of Associate Professor of Linguistics.

“At the time, one of the most prominent linguistics professors at the university had just left, after some officials attempted to eliminate the major.  But a coalition of faculty and students intervened to save the program, and I was hired to fill the position” Sophia recalls.  The 1997 Alumni Scholar faced the daunting task of helping the two full-time linguists remaining at Brandeis to rebuild the program nearly from scratch.  In time, Brandeis brought on two other full-time linguistics professors, and the faculty worked together to solidify the program’s standing.  Their hard work paid off.  Just a year ago, Great Value Colleges rated the linguistics program at Brandeis as one of the top 25 in the country.

Since her arrival at Brandeis, Sophia has seen the linguistics offerings at the university rapidly evolve. The undergraduate program has nearly tripled in the number of majors, and has fostered a vibrant community of undergraduate and graduate students and researchers. The faculty are now offering not only the core courses, but also advanced electives and research opportunities in multiple core areas of linguistics, such as phonetics, phonology, syntax, semantics, and pragmatics.

In addition, the explosive growth in computer modeling, big data, and artificial intelligence over the past decade has revolutionized the hottest subfield in Sophia’s discipline: computational linguistics.  “Think Alexa,” Sophia said, referring to Amazon’s popular listening and talking gadget.  But Amazon is not the only technology company in this burgeoning field.  “The two largest employers of computational linguists,” Sophia noted, “might be Google and Microsoft.”  Brandeis offers a Master’s degree in computational linguistics, and Sophia said that the starting salaries for graduates of the program are through the roof.

For Sophia, the study of language is more than just a career.  It is a passion.  She believes that the study of language is in dire need of a massive overhaul in the United States: “Language and language arts teachers are not taught what the science of language has discovered about reading, language development, and learning languages. Incorrect pedagogy contributes to the achievement gap of Black and Latino students.”  Some of Sophia’s research is dedicated to studying the linguistic trajectories of immigrant teenagers and adults and their bilingual children.  When asked whether schools should enroll newly immigrated students in full-immersion English language programs, Sophia responded that rather than steering our immigrant students away from their native languages, our schools should be focusing much more heavily on teaching our non-immigrant, monolingual students foreign languages.  “And it should start in kindergarten,” Sophia remarked.

“Did you know,” she continued, “that, on average, Alzheimer’s is diagnosed four years later in bilingual individuals?”  The part of the brain involved in executive decision-making gets a mini-workout every time a bilingual person decides which language to utilize.  A lifetime of these mini-workouts might help to delay the onset of Alzheimer’s and other forms of dementia.  “There is also evidence,” Sophia added, “that being bilingual enhances daily cognitive function and academic performance.”

The benefits of multilingualism are highly relevant to the Milken Scholars Program.  Approximately seventy-five percent of Milken Scholars are first- or second-generation immigrants, and an overwhelming majority speak more than one language.  Thanks to Prof. Sophia Malamud, we hope to gain a better understanding of the linguistic lives of many of our Scholars. 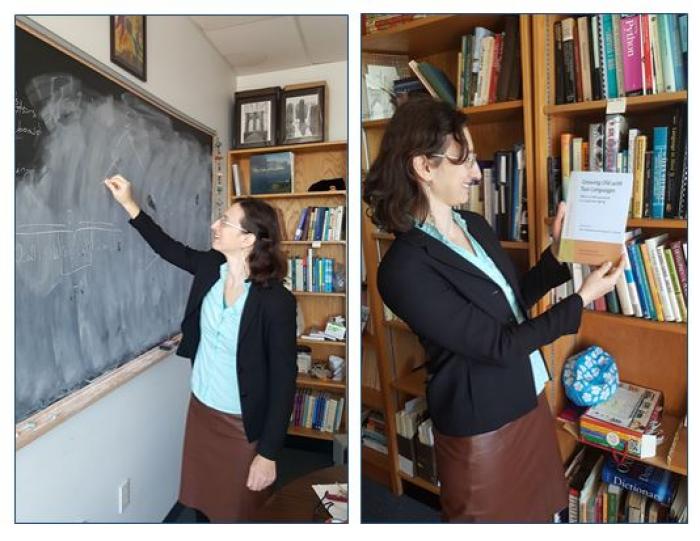 Sophia Malamud, MS '97, pictured in her office giving a lesson on linguistics at the blackboard and with a book about the cognitive effects of bilingualism.