Marisol León: Fighting for Justice in the Courtroom and the Classroom 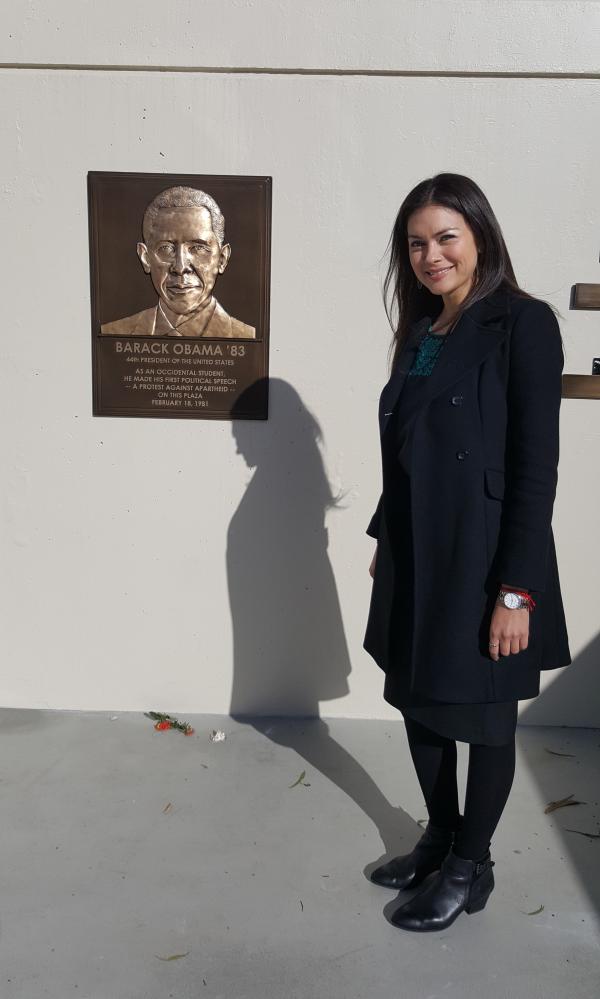 Marisol León, MS ’03, is a civil rights attorney with the California Department of Justice and an adjunct professor at Occidental College, where she teaches a course on Resistance Movements and the Law to undergraduate students.  In both capacities, she is fighting for justice on behalf of vulnerable populations.

As an attorney, Marisol conducts large-scale civil and criminal investigations and litigates matters in which there is a pattern or practice of a violation of a civil rights law—with a particular focus on immigrants' rights, consumer protection, conditions of confinement in jails and immigration detention centers, and police practices.

“I also prosecute so-called ‘immigration consultants’ who are actually engaging in the unauthorized practice of law,” she explained.  “These individuals convince their clients that they can help them obtain U visas, asylum, and other forms of immigration relief. A few years ago, for instance, an immigration consultant convinced two of my cousins to apply for asylum even though they did not meet eligibility requirements.  After taking most of their life savings and mishandling their immigration case, my cousins were deported.  These ‘consultants’ often misrepresent themselves as immigration lawyers and collect enormous sums from families who are in terribly desperate situations.  I never aimed to do criminal cases, but shutting down these businesses and trying to get restitution for victims and their families makes working on them deeply fulfilling.”

Marisol does not merely investigate and prosecute law-breaking entities.  She also seeks to empower vulnerable populations.  “My legal work has also involved community education.  I have facilitated Spanish-language ‘Know Your Rights’ workshops on immigration services fraud and wage theft,” she explained.  “I facilitated these workshops to community members throughout the state.”

Marisol’s passion for community empowerment and education is longstanding.  Prior to attending law school at UC Berkeley, she worked with Otros Mundos/Friends of the Earth-Mexico in Chiapas, Mexico, and collaborated with social movements organizing against mega-development projects displacing rural communities and undermining indigenous autonomy.  When she returned to the United States, she completed a Humanity in Action Fellowship, and applied lessons learned in Chiapas to her work as an educator at her middle school and high school alma maters in Los Angeles.

“I absolutely loved being an educator,” she reminisced.  “I missed it so much, I decided to develop and teach a course on Resistance Movements and the Law one night a week at Occidental. It is largely inspired by my work in Chiapas, my experience researching and living with Brazil’s Landless Rural Worker’s Movement during college, and research I conducted while in law school on indigenous resistance to the Agua Zarca Dam in Honduras.  I wanted to provide college students with an opportunity to analyze how resistance movements use the law to mobilize, to frame grievances, and to advance and develop legal protections for marginalized populations, as well as how the law is used against those same movements through state-sponsored violence and government repression.”  While Marisol initially worried that undergrads would not sign up for an evening class, enrollment has exceeded expectations and her class has drawn rave reviews.  “College students are amazing to work with,” she exclaimed.  “They are so passionate and engaged, and the questions they ask about the current limitations of the law in contributing to social change are inspiring and thought-provoking. At the end of the semester, students present their individual research on a resistance movement we have not covered in class, which is an incredible learning opportunity for me and their classmates. Our class discussions consistently remind me that while the law is a useful catalyst for change, it is more often than not a supplement to grassroots organizing and mobilizing efforts. My students give me hope and keep me grounded.”

Marisol is not the only civil rights attorney to educate Occidental students about resistance movements.  As an undergraduate, Barack Obama (who later practiced civil rights litigation) gave his first political speech—a protest against apartheid—at a plaza in the center of the campus.  As Marisol stood next to a plaque commemorating the nation’s 44th President, she said that she felt inspired to work at a university with a proud tradition of social justice advocacy.

Reflecting on her life’s journey, Marisol remarked, “My grandparents were small-scale farmers in rural Mexico. My uncles first came to this country through the Bracero guest worker program, and my parents immigrated to the United States from Mexico shortly after. They have all worked multiple jobs and long hours in challenging conditions.  I honor their sacrifices by advocating on behalf of families like mine—both in the courtroom and the classroom.”