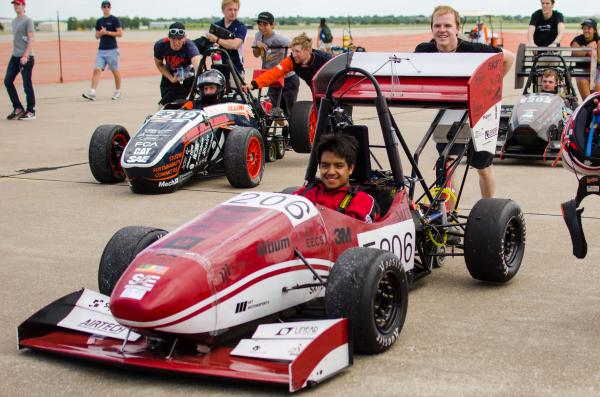 Luis Mora, a 2014 Milken Scholar, was the captain of MIT's Formula SAE team, which builds a racecar for collegiate competition.  After graduating in 2018, he accepted a job with Tesla.  Luis recently took the time to answer questions from the Milken Scholars Program regarding his experience with the Formula team and its transformational effect on his development as a mechanical engineer.  We hope you enjoy his incredible story as much as we did!

What exactly is Formula SAE?

Formula SAE is a collegiate engineering design competition hosted by the Society of Automotive Engineers (SAE). Teams from colleges all over the world design, manufacture, and test formula style open seater racecars. Teams are responsible for all design decisions, financial matters, and logistics. FSAE competitions consist of static events, which include a business case and a design presentation, and dynamic events, which include a drag race, autocross hot lap, and a 22km race.

Why did you join the MIT Formula SAE Team?

I joined the team because I was really attracted to racecars, I was mechanically inclined, and I wanted to drive the racecar of course!  I first heard about the team from an MIT alum who I met at NASA’s JPL while interning there in 2014.  As she described it, I knew it would be the perfect thing for me.

What did you enjoy most about the team?

This was a project that our team completely owned.  All the engineering decisions, financials, logistics, and driving were done by the students.  I loved how well I learned from solving problems in FSAE, much better than I ever learned in class.  My teammates were some of the most gifted mechanical and electrical engineers at the school so it was great working with those people…not to mention the fact that we became close friends. And driving that formula car was amazing.  I’ve never driven anything so extreme.

How did your role on the team change throughout college?

My first year I was involved with a mechanical subteam.  The following year I became the subteam lead.  My third year I became the team captain, and it was a huge jump in responsibility and time commitment.  My fourth year, I was advising the captain, leading 2-3 engineering teams, and consulting with many different subteams since I had become the expert in various systems across the car.

Why did you want to be the captain?

Ever since my first year on the team I knew I wanted to be the team captain.  I looked up to my predecessor and I saw how the role made him an awesome engineer.  At the end of my first year I noticed many ways the engineering could be better, and being the team captain would give me the authority to make the appropriate changes.

The biggest challenge with managing other MIT students on the team was getting them to prioritize work on the formula team over other things.  It was my job to push everyone on the team to the edge of their comfort zone, and then a little more, to ensure that projects and tasks got finished.

What was your average week like during school when you were captain?

Mornings were filled with classes.  In the afternoon, I would head over to the shop.  Usually some teammates were there, but sometimes I was the only one there.  I would run team meetings from 6-10PM on Mondays and Wednesdays.  On other evenings, I would do homework or work on Formula stuff.  Repeat.

Everyone on the team would go to the shop on Saturday.  This was the best day for collaboration and communication—but the worst day to actually sit down and get work done.  I spent most of my Saturday talking with all the engineers and giving guidance, reviewing work, or teaching.  On Saturday evening, the shop would clear out a little more, allowing me to do some work.  Sunday was usually my day to rest, unless there was some kind of testing trip for the formula car.

Can you describe the experience of leading your team to a second-place finish in the endurance competition in 2017?

The 2016-2017 season was very difficult for the entire team because we had decided early on that we were going to design a car with a clean sheet of paper.  All the legacy designs were thrown away.  Every subsystem was redesigned and manufactured from the ground up.  Leading the team through this big design step was stressful, time consuming, and meticulous, but it was also very rewarding. Our second-place finish is still the highest the team has ever placed.

What was that like for you, both in terms of designing the vehicle and driving the car across the finish line?

The two weeks before the competition were the most stressful. We had a string of motor controller/inverter failures. I handled the debugging process and made repairs. I burned through 2500 dollars of replacement parts, had a few all-nighters, and was feeling demoralized. I emailed my team asking for someone to step up and help me handle some of the logistical responsibilities. On the night before we left for the competition, the car finally seemed to be working reliably.

However, at the competition, during our brake technical inspection, the bracket holding our brake pedal assembly to the frame fractured.  We had to weld on another bracket that night in the parking lot of our hotel. We also had issues with a battery contactor, our front wing, and our charger.  Before the endurance event we used our precious time on the practice track to develop a power limiting strategy that would allow us to finish the endurance race without overheating the battery pack.  In short, almost every part of the competition was super stressful.

So once I crossed the finish line at the endurance event I was excitedly screaming in my helmet.  Through my radio headset, I could also hear the rest of the team cheering from the stands.  I was super relieved that all the hard work had materialized into something.  My family was there at the competition, and I was so happy that they saw what we had achieved.

How did your experience with the Formula team help you land your current position at Tesla?

A friend from the Formula team interned at Tesla a few years ago.  Last year, I talked to him about his experience and his work seemed very interesting.  Fast forward to this summer.  I was browsing through Tesla’s careers website, and it turns out that his old group was hiring.  So I asked him to write an introductory email to send to his old boss.

The group is very interdisciplinary, working in areas of mechanical engineering, power electronics, controls, dynamics, and cell engineering.  My experience with Formula exposed me to many different kinds of engineering disciplines and it was all hands on which gave me a great engineering intuition.  This was definitely helpful in the interview process, since the interview was highly technical and fast paced.

How has your experience with the team continued to help you in your position today?

Because of my experience with the Formula team, I feel that I have been able to come up to speed quickly at Tesla and that I am making meaningful contributions.  I think it’s possible that without my Formula experience my learning curve may have been much steeper. 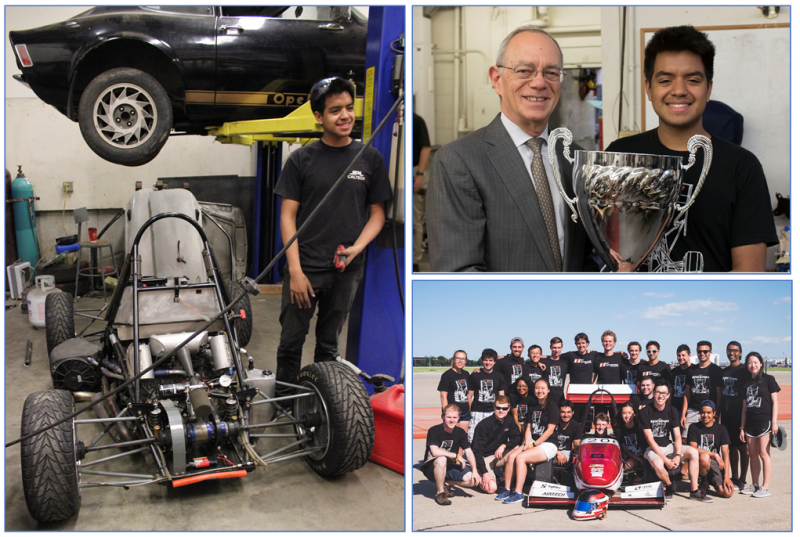