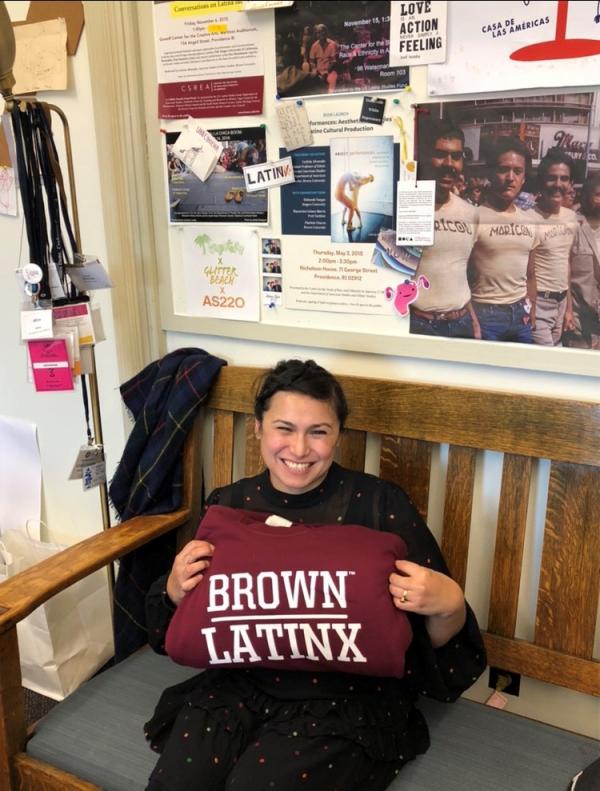 Leticia serves as the Director of Undergraduate studies for the Ethnic Studies concentration (major) at Brown University. She shares the story of her career path here with Evelyn Torres.

In high school Leticia Alvarado MS ’00 wanted to be an artist. “But kids from our community don’t often have the opportunity to pursue passions that privilege the use of creativity and imagination,” Leticia said. Her interest in pursuing the arts and leaving Los Angeles to study at Columbia University was difficult for her family who hoped she’d stay close by, as is common in Latinx communities.

So even though she did not know her career was going to look like this, Leti explained that her passion for the arts and teaching were always intertwined. Right after graduating from Columbia she became part of the NY City Teaching Fellows Program where she had the opportunity to teach 3rd grade in Washington Heights. Feeling ill-prepared for this teaching role and that this program displaced much more amply prepared teachers, she felt it was not fair to her students who needed so much extra support for their learning. Leti’s trajectory took her through the Brooklyn Children’s Museum where she worked with teens who were peer educators on racial justice issues. Brooklyn’s Crown Heights neighborhood, where the museum is located, has a history with race riots so her job was always exciting, to say the least.

In the following years Leticia found herself working at the Brooklyn Academy of Music, the Education Department at Planned Parenthood and the Museum of Sex where she was the Collections Manager and Registrar. Even though she had moved away from making artwork, she was still fascinated to be in the world of the arts and seeing how artifacts told us things about the world.

Leticia began her Ph.D. in 2006 at New York University and was grateful for the funding she was awarded to pursue this opportunity. Living in New York City was expensive and her fellowship not only paid for school but also provided a living stipend. It wasn’t until she began TAing in her Ph.D. program, however, that she finally knew that she wanted to return to teaching. “Working with young impressionable minds,” was fascinating as was the incredibly political space that was the classroom, Leti said. Her work has remained focused on exploring how the world is structured along the lines of race, gender and equality.

Now at Brown, Leticia serves as the Director of Undergraduate studies for the Ethnic Studies concentration (what majors are called at Brown) in the American Studies department. As we spoke, her candidacy for tenure was being reviewed. She explained that “all the stars have to be aligned for you to just be a contender.” First of all, a spot has to open up for exactly what you do, in order to be considered for a tenure-track position. Once hired for the tenure track as an assistant professor, professors’ responsibilities would be reviewed in three areas: (1) Research (2) Teaching and (3) Service, to the Department, to the University, and the Profession. As part of teaching, she is expected to conduct student advising. When she pointed towards her door at the row of chairs that she had placed outside and told me how she often had lines of students outside her door seeking emotional support, it was hard not to think of one’s own experience and the importance of having Professors that one could relate to and find support in. That part of a professor’s work isn’t a separate category of responsibilities, and it’s seldom acknowledged or considered a part of their teaching, although it's a full caseload on its own for those professors like Leti, who are often sought out for this kind of support from their students.

As part of the process for tenure review, Leticia’s full dossier was sent out to 10 anonymous tenured experts in the field who would be tasked to read her book, her published work, class curricula, events organized, activities conducted on and off campus in support of her work and area of focus, along with any student and peer reviews. When asked if she would consider going back to the West Coast, she said that being on the East Coast for her was being home now. “I became who I am in NY.”  Leti became an adult, a working professional, a wife, and now a mother of two. Being out east, and now at Brown, has been a tremendously rewarding situation that would be difficult to replicate elsewhere.

In November 2019, right before the start of the holiday season, Leti received an early Christmas gift, as she was granted tenure as a Professor at Brown University in the American Studies Department. We are thrilled to celebrate the news and congratulate Leticia on this amazing accomplishment. We can’t wait to continue hearing about Professor Alvarado’s continued work and hope that more Milken Scholars have the wonderful opportunity of getting to know her and perhaps even taking one of her courses!